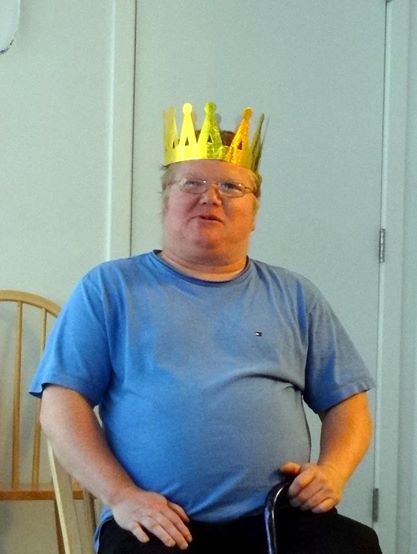 I remember when I first met Sean.

It was at our community game night, an event we hosted a couple times every month at a local coffee shop. Free snacks, no beer, and enough Apples to Apples to make you want to puke: a perfect fit for a downtown with the better part of eight bars in two blocks.

Sean was the sort of person nearly everyone overlooks: short, rotund, baby-faced, with a perpetual “please-don’t-hurt-me!” expression that begs to be pitied or ignored.

We learned quickly that Sean’s greatest daily accomplishment was managing to traverse the three blocks from his apartment to that same local coffee shop every morning, where he would order a latte while his face turned red, and then sit in the corner to drink it, before returning home to his cat.

It did not look like he was having a good time.

At the end of the night, he walked up to me and announced, “I think I’d like to come to your house for that life group you’ve been talking about!” He said it with the same air of frantic determination you might hear from someone announcing that they wanted to take a walking tour of Antarctica.

Sure enough, next week he came to our house, sitting in the corner, smiling a little bit, and sweating bullets.

It did not look like he was having a good time.

I gave him a ride home. (When you work with people who don’t have cars, you end up one quarter pastor, three quarters taxi cab driver.)

And so it continued from there. Life groups. Worship gatherings. Picking up trash on the streets. Once Sean learned that we were safe people, he simply couldn’t get enough of us.

We also learned about his experiences with other churches.

From what I learned as I read between the lines, they had all treated him in one of two ways. Some churches had ignored him: letting him sit in the back, occasionally giving him a ride, and politely ignoring everything he said. (I expect that socially anxious five foot five men who turn red and stammer whenever they’re around people were not their target demographic.) The other set treated him with perfectly tuned condescending acceptance. They’d tell them how glad that they were that he came to their church, (in tones normally reserved for puppies or small children.) Sean was their mascot and they’d happily trot him out on occasion, no doubt very proud of what an accepting bunch of people they were.

If you are a part of one of them, listen to me.

They don’t need to be coddled.

They don’t need you to praise everything they do, like you might a three year old who just made a sculpture out of her own poop.

Their ideas and opinions don’t need to be ignored for their own safety.

They don’t need to be trotted out like a bunch of trained monkeys every time you need to prove how wonderfully inclusive your church is.

They need to be loved.

Here’s the difference between the way we treated him and the way every other church treated him.

To many, he was their mascot.

To us, he was our brother.

We got to know him.

We rolled our eyes every time he started talking about how much he hated Barack Obama. We even reminded him that everyone might not share his distaste for him.

We listened to his stories like they meant something.

We laughed (or winced) at his Jeff Dunham videos.

We let him tour us around Boston.

We brought him over to our house to watch sports and eat food.

We got pissed at him when he used his disease as a crutch to lean on, rather doing the hard work of healing.

We harassed the hell out of him when he became depressed and started isolating.

In other words, we loved him like he was an actual human being.

One year, we learned that his birthday was coming up.

He was not looking forward to it.

We said to him, “Sean, why are you not looking forward to your birthday?”

We asked more questions. We learned that he was worried that his birthday might trigger his depression. Birthdays often did for him.

We said, “Sean, come hang out with us. We’ll throw you a party!”

He had shrugged. “No one celebrates my birthday.”

We got about a dozen people together. We had silly hats. We had balloons. We bought him a cake. We had cards. We even had presents.

We brought him to our house, sang him “Happy Birthday!” and did all the other assorted silliness that comes with birthday parties.

After cake and presents, all of us shared, in turn, what we loved and appreciated about Sean.

I didn’t think it was a big deal.

A cake. A few people. A few presents. A little love.

But, when we finished sharing, Sean spoke. He had a huge grin on his face.

He said a lot of things, but there were only three I remembered.

“This is the best birthday party I’ve ever had.” (Forty years on this earth and this was the best anyone has ever done for you? I’m so sorry, Sean.)

“The Vine has saved my life.” (And, I knew, he didn’t mean that metaphorically.)

It was another beautiful moment.

I wish it had lasted forever.

What Do You Think?

1) What does it mean to treat people like they’re people, and not just scapegoats, monsters, or mascots?

2) What are the challenges of accepting people like Sean into your community?

Coming Thursday! Part Six: And the Glorious People of the Vine (2/2)

Poetry Mondays – I Cannot Offer You My Wisdom

The Kingdom of God Is Just An F-Bomb Away