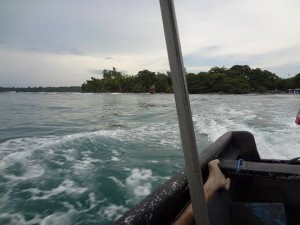 1) Stayed in a resort hotel (since I was 16) [Full-service everything from suspiciously happy and contented staff.]

2) Not cooked for myself for two full weeks (since I was 21) [So delicious! So disorienting!]

3) Done “Happy Hour” (ever) [Having discovered Happy Hour, I did it as much as possible. It’s rare my wallet and my taste buds agree on anything.]

4) Gone snorkeling (ever) [Swim with the fishes, the coral, and one super huge mutant lobster]

6) Sat in a beach chair for more than an hour (ever) [How did I ever not experience this gloriousness before?]

7) Had a manager give me free drinks (ever) [It must have been my wife’s charming conversation.]

9) Fended off a monkey trying to steal my backpack (ever) [Monkeys are dangerously adorable. This would become a theme of the month.]

10) Watched a brain damaged anteater from a few feet away. (ever) [At the Jaguar Rescue Center. (It was not food for the jaguars)]

11) Traveled for vacation to a non-relatives house (since I was 25) [Yup, we’re that exciting]

12) Traveled to a foreign country for vacation where I did not speak the primary language (ever) [my tourist Spanish is great now!]

13) Used a taxi more than once in a day (ever) [Do not drive in Costa Rica. It’s pura vida all the time, except when in a car. Then they all drive like their hair is on fire. Or they live in New Jersey.]

15) Watched a full sporting event on ESPN Deportes (ever) [The Golden State Warriors play beautiful basketball in any language, although, if you close your eyes, it sounds just like soccer. ‘Steph Curry….TRIPLEEEE!]

18) Fed monkeys with owner of the hotel I was staying at (ever) [They love plantanos and will take them right out of your hand! Eee! It’s so cute!]

19) Engaged in stare down with monkey, which I won (ever) [The one who has the plantanos makes the rules.]

20) Saw the Pacific Ocean (ever) [From a mountain vista about twelve miles away. Yes, it was that gorgeous. #winningatvacation]

21) Ziplined (ever) [Think rollercoaster in the forest.]

22) Did the Tarzan swing (ever) [While screaming, ‘This is the best swing EVER!’ and also ‘Ooeeeoooeeooooo!’]

23) Walked through the canopy of a cloud forest (ever) [Beautiful. (And exciting every time the bridge swung back and forth in the breeze.)]

24) Been to a hummingbird garden (ever) [Some of those suckers are as big as robins! They were entrancing and terrifying.]

25) Gone to a Quaker meeting (ever) [This group of Quakers is pretty awesome. They also hold silence better than any group I’ve ever met.]

26) Gone a night walk in a cloud forest (ever) [And saw a sidestripe pit viper from two feet away! And a toucan! And a bird of paradise!]

27) Played fetch with a dog using a plantain (ever) [The plantain lasted about as long as you think it would.]

28) Saw a sloth on the grounds of our hotel (ever) [I swear they pose for pictures.]

29) Got a moving truck stuck on a beach (ever) [And discovered that islanders are congenitally helpful people. Some of them even have old pickup trucks with Samson-like towing capacity.]

30) Moved to an island (ever) [From Costa Rica to a Maine island in July? Best summer ever!]

Your Weakness Is Your Strength